Smoking Vs. Edibles: How Your Consumption Method Can Affect Your Experience

Jan 14
While there are many factors that can affect your cannabis experience, the method of consumption can have the largest impact on your experience.
Though different types of products may contain the same cannabinoids, terpene profiles, and CBD to THC ratios, the method of ingestion plays a large role in how these reach your system and ultimately affect you. So, which is the right method for you? Let’s take a quick dive into the differences between smoking and ingesting cannabis to find the right fit!

Smoking cannabis is by far the oldest and most popular form of consumption and with good reason; all you need is dried flower, a way to ignite your flower, and something to smoke out of – be it rolling papers or a pipe!

When smoking cannabis, all of the terpenes and cannabinoids (like THC and CBD) combust simultaneously and enter your lungs in the form of smoke. Once in your lungs, the smoke is absorbed into your bloodstream, where it makes its way to the brain, and the effects begin to set in.

Because the time between inhalation and the cannabinoids reaching your brain is so short - the onset of the effects from smoking are quite rapid and you will feel a high within minutes. The effects from smoking higher THC strains will generally last between 1-3 hours, though some effects and feelings can linger for up to 8 hours.

Not comfortable with smoking? Vaping is inhaling the aerosolized version of cannabis, and has become an increasingly popular method of consumption.

When you ignite cannabis to smoke, you’re burning it, which releases combustible products that are potentially toxic and carcinogenic. On the other hand, vaping which uses a vaporizer or atomizer, electronically heats the cannabis, which generates water vapour, cannabis compounds and other chemical components.

Vaping aerosolized cannabis is so new that long-term studies of clinical safety to the exposure of this method is still unknown. Vaping is believed to be safer than smoking, some say it tastes better, and it has been documented to be less costly than smoking. Researchers suggest that vaping does deliver more THC, so those new to cannabis should be careful. This coincides with surveys of people who report that vaping yields effects with less cannabis, hence the cost-saving benefits.

Because of this delayed process, the THC takes significantly longer to enter the bloodstream than when smoking, typically anywhere between 45 minutes to a couple hours. For the same reason, the effects from consuming an edible containing THC last much longer as well, generally around 8 hours with lingering effects lasting up to a full day.

Although oral consumption reduces the harmful respiratory effects that comes along with smoking, the bioavailability of the cannabinoids is lower and the onset of action is delayed. This is important to note for medical patients, as they may require immediate pain relief or be unable to tolerate cannabis by ingestion. 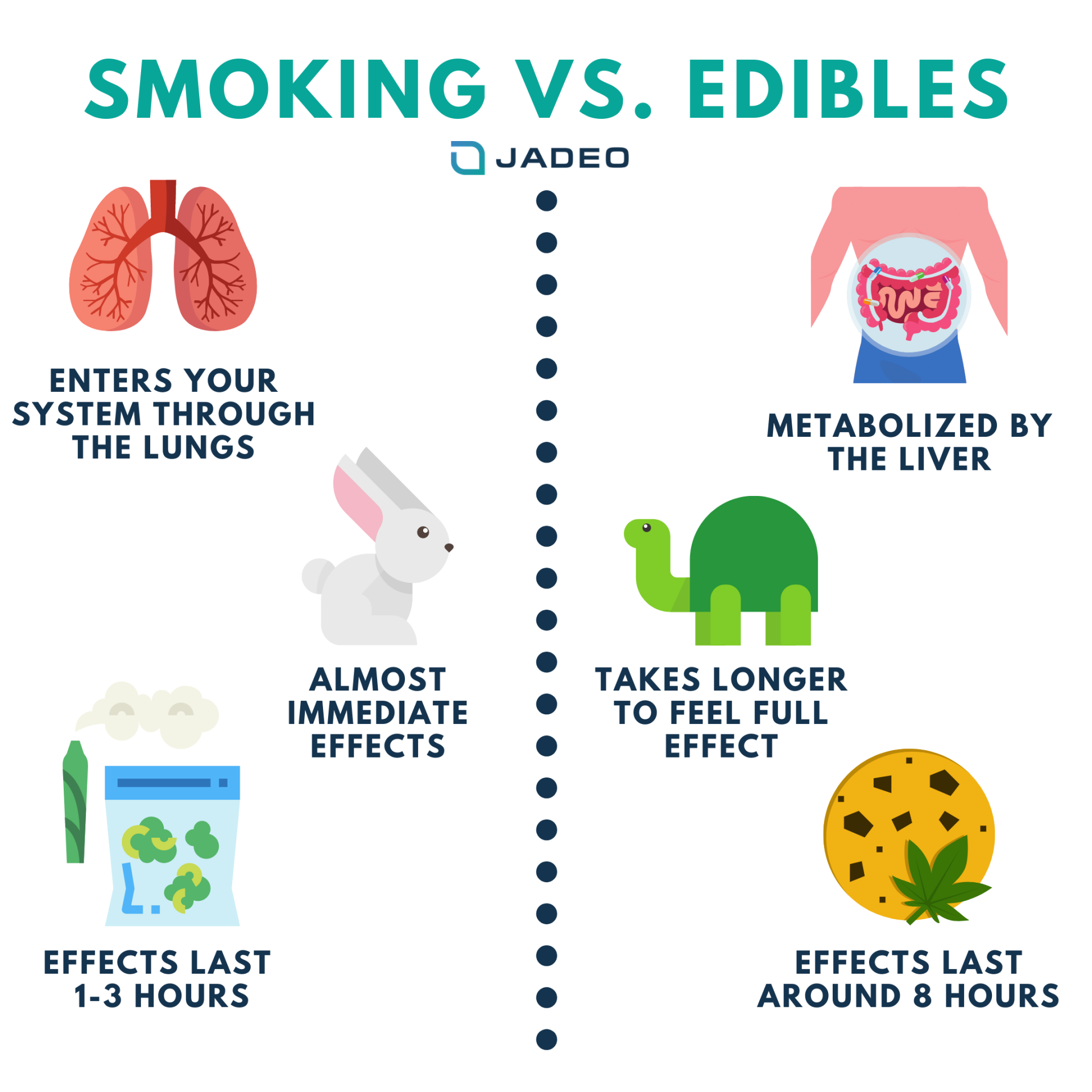 Which one is right for me?

Cannabis affects everybody differently, and knowing which method will have the most positive effect on you can be tricky. If you are consuming medical cannabis, your doctor or healthcare team will prescribe a consumption method and correct dosing for you.

However, if you are new to recreational cannabis entirely, it may be best to try smoking or vaping cannabis for your first time. Finding the right dosage for yourself as a newcomer is a bit easier with smoking and vaping, as the effects are almost immediate. If you find yourself feeling uncomfortable, you can rest easy knowing the effects will wear off within an hour or so.

With recreational edibles, start off with a small amount (smaller than you think you will need), and work your way up from there. Due to the longer period between ingestion and the cannabinoids reaching your brain as well as the slower onset of the effects, it is easier to make the mistake of thinking you need to ingest more product before it has all kicked in. The effects will last much longer as well, which will be a great thing once you know your dosage, but can be a problem for newcomers. This is why you should always start with a small amount of THC and work your way up.

When it comes to consuming cannabis, there is no definitive "best” way. Different consumption methods deliver different experiences for everybody and the “best” method is different depending on the experience you’re looking for. Now that you know how smoking, vaping and edibles will affect your high, you have all the tools you need to determine the best method for you!

Smoking cannabis may feel healthier than smoking a cigarette, but is it really? Let's see what the research says.

This strain has a famous relative, it's the number one selling strain on OCS.ca, and it's the second most popular strain in Canada, right after Blue Dream.

Three Things You Need to Know About Cannabis and Driving

Here are the top three ways to make sure you (and your stash) make it to your destination safely and legally.